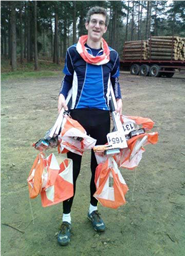 Glen joined LOK in 2000 and he soon got involved in organising and planning. His children Theo and Lydia often accompanied him to events and enjoyed taking part.
Glen was extremely competent with technology and took the lead in creating its first website and brought everyone up to speed with electronic punching.
In 2006 he became Klubb Chairman bringing a no fuss, no drama leadership style to everything he organised and planned.
He often took the lead with Klubb activities, and he memorably organised the JK parking in 2008 at Leith Hill in a blizzard.
Glen had to step down in November 2008 after he discovered that he had kidney cancer, but he never dwelled on the negative, and continued to orienteer whenever he was well enough. His last big event was completing M50S at the British Champs at Winterfold on the Surrey Hills in May 2013.
One of Glen’s most endearing features was his matter-of-fact nature … here I’ll quote Glen’s own words to describe an ‘inconvenient’ event that happened during his last July with us:
“After a couple of months of not much exercise following the British Champs owing to tiresome difficulties with drugs – I was ready to resume in early July and dusted the bike down, added about 80 psi to the tyres and spun around the lanes of Bucks for an hour (ok walking up the hills).
So on Bastille day in the evening I pulled on trainers for a short 20 minute jog through the surrounding paths. Down the hill I started, noticed thigh pain so stopped to stretch a bit but then carried on (after all pain is just weakness leaving the body). A few metres further into the wood there was a crack and I collapsed in a very ungainly heap on the forest floor. My right leg was at a very unnatural angle and apart from pain I had a complete lack of control over anything above the toes.
Oh dear. 8pm. Wooded bridle path. No mobile. Not looking good. Do you know how loudly you can shout if you really really try? – I discovered that fortunately I still have reasonable oomph in the lungs and for the first time in my life cried ‘HELP’ with all my might. But answer came there none. I thought of ‘Touching the Void’, but decided that since it was a very warm evening I was unlikely to die of exposure overnight. It would nevertheless be uncomfortable if it came to it so I concluded that dragging myself out was something I had to start on. I made about 10 meters in half an hour. Only another 300 or so and up a rather steep incline would get me to Grays Lane.
Hallelujah for good neighbours – at around 8.45 some friends arriving home heard my cries and came bounding down to find me – relieved was an understatement! Half an hour later the paramedics arrived and gave me some morphine and there followed a lift up the bumpy bridle path in the back of another villager’s 4WD, strapped to a recovery stretcher.
Off to Oxford in the ambulance, X-rays, pain, but good NHS service. An MRI scan on Monday revealed the problem – a silent tumour had weakened the top of the femur so that the simple pressure of the downslope running impact caused it to snap. It had given no warning at all. Ho hum.
I was operated on in Oxford where they chopped the femur off half way down and gave me a shiny new stainless steel and titanium femur and hip.”
He was soon back in action, looking forward to making an impression in 2014 as a young M55 …. Only three weeks before his death, he could be found processing results at an LOK StreetO in London’s West End.
Glen was a man who simply enjoyed the sport of orienteering, and who never felt he had anything to prove … he just loved taking part. He was an inspiration, even through his most awful setbacks, and he was a lovely man whom it was a privilege to know.