Ian was born in Burnley, Lancashire, attending Burnley Grammar School, before going to Oxford University, where he studied geology. After Oxford he joined the British Geological Survey or BGS. He nearly didn’t get the job because he initially failed the colour vision test.
In 1969 he set off from Burnley in a Morris Traveller to Aberystwyth for his first ever field season of mapping the South Wales Coal fields. Ian always said how much he enjoyed his field seasons, being outdoors, feeling he was using his degree in a worthwhile way.
Winters were spent in London writing up his field notes.
In his spare time, he started orienteering as an independent, joined Dysart Dashers, and was a founding member of the London Orienteering Klubb (LOK). He especially enjoyed slightly offbeat events such as the annual match against Leinster Orienteering club in Ireland. An event that involved overnight train and ferry journeys. Whilst a member of LOK he was at various times Minutes secretary and auditor as well as designing the covers for early editions of the club magazine. 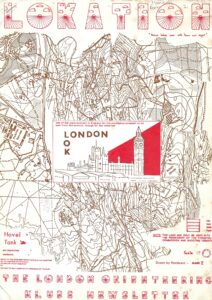 David and Miriam Rosen knew Ian from their time in LOK. Miriam writes, “We became friends with Ian through orienteering when he was working and living in London. We had a lot of contact with him at meetings and events, and we greatly enjoyed his company. He was thoughtful and engaging, and always took an interest in other people.
He was also very willing to help out when our club (London OK) was putting on events.
A particular highlight for me was the 19 80 Karrimor 2 day Mountain Marathon on Arran which Ian and I did together. We competed in the A class which was quite tough, especially for me. I remember how encouraging he was and what a lot of fun we had.”
Through his work with BGS, Ian moved to their Grange Terrace office in Edinburgh in 1981.
Very busy with his change of job, he didn’t actually join ESOC till the following year.
Ian became an expert on the geology of the Irish Sea; his papers written in the 1980s and 1990s are still acknowledged and cited as recently as June 2020.
Ian “retired” from BGS at the age of 47. He then did consulting for a small oil company in Aberdeenshire.
Ian had several roles within the Edinburgh Geological Society, including organising excursions, auditing accounts, and as publication sales officer.
Ian quickly became involved with ESOC’s activities, and was competing regularly in orienteering and hill races. Ian was a long standing member of the Fell Runners Association, and several members of ESOC were still hill r unning a fair amount then.
Ian made a significant contribution to ESOC. He became President in 1984 following Ian Beck, and along with John Morris, now (Southdowns Orienteers), planned ESOC’s day at Baluain and Banvie Woods in 1985 for the S6D.
From 1985 till 2015, Ian attended and assisted every single ESOC day at the S6D. Very often camping in the assembly field the night before, and worked very hard on whatever task he was allocated. When ESOC were the central organising club, he would go from one site to another the evening before and camp. The rest day for Ian was a rest day from any orienteering work, and usually involved a hill walk.
Ian began to compete less in the nineties, even less the following decade, and last orienteered in 2012 at the final of the CompassSport Cup in south Scotland. Ian never lost interest in ESOC and was hugely supportive of me when I became ESOC president in 2015. Ian continued to attend our social events on a very frequent basis.
One of the regular socials which Ian planned and organised, never from his own home, was an annual Hash run. He had been introduced to hashing in London, and brought his knowledge and planning skills here. This became a highlight for a summer run. With Ian’s knowledge and planning skills here. This became a highlight for a summer run. With Ian’s attention to detail and thoroughness in using all the hashing techniques and seeking out interesting terrain, it always made for a fantastic evening. His pre-hash briefings were legendary, showing a high level of preparedness, using a pointer for various diagrams, and running through the hashing calls. Ian’s last hash was planned in 2016.
Another ESOC member very active when Ian came to Edinburgh was the late Eddie Harvey. As well as orienteering, Eddie was a very keen mountaineer and soon introduced Ian to the Scottish hills. Eddie was a fan of big days, travelling with light footware, (O shoes, but not in winter), fairly direct ascents, obscure routes and limiting contact with others on the hills. This approach just fitted with Ian’s temperament for hill walking. the hills. This approach just fitted with Ian’s temperament for hill walking. Remote camping and mountain bothies, were Ian’s ideal level of accommodation.
From the mid nineties as work permitted, we spent about twenty years walking on the Scottish mountains, all seasons. His geological knowledge and wide range of interests made our trips wonderful occasions.
We usually planned our walks on some of the lesser frequented hills, so that we met fewer others there. Ian always made copious notes in his tiny handwriting, writing up during lunch breaks, then finishing when home. To record the fact we’d not met anyone else on the hills that day, Ian coined the term PFD, meaning we had a People Free Day.
Ian, along with his sister, had a house in Ambleside, and he went there very regularly from Edinburgh. When in the Lake District he started bagging Wainwrights.
The environment was something else that Ian felt strongly about, and he practiced what he preached. He always reused if he could and if there was a cold snap rather than increasing the amount of time the central heating was on, he just used to put on another layer of clothing.
As Ian began to find long days on the hills more difficult his interest in natural history was rekindled especially bird life. He loved watching the birds on the bird feeder at the house in Ambleside. During the recent lockdown as a form of relaxation he decided he would try to learn the Latin names for birds.
Everyone who knew Ian would recognise his modesty, sincerity and his genuine interest in others.
Ewart Scott, Karen Jordan (Ian’s sister), Miriam and David Rosen.