The final GLOSS of the 2016 series enjoyed another fine summer day. Alexandra Palace was a fitting end to the series. The terrain was the hillside below the Palace which was a mixture of woodland lower down, and formal parkland higher up. Nicholas Barber (ShUOC) and Helen Gardner (SLOW) were quickest round the GLOSS course in 20:04 and 24:55 minutes respectively. However after handicapping Matthew Harden (HH), a M16, had the fastest time in 17:14 after a deduction of 15:22 minutes.

The GLOSS extension this time was a separate follow on course instead of a direct extension to the course. An odds/evens score with a time limit of 20 minutes proved tricky with over half the field going over time, but at only 5 points penalty per minute was it worth going over to get a few more controls? Nicholas Barber got 21 controls in 21:30 (penalty 10 points) to win with 200 points. Ian Ditchfield of MV was 2nd with 170 points in 19:47.

It was close at the top with only a few points separating SLOW and HH, with both having 15 finishers, but SLOW edged the result, with all their 6 scorers being within the first 14 handicapped results.

With SLOW taking the full 20 points for this event this meant they could drop their 4th place from Haberdasher’s event – and in the best 4 of 5 scoring had a perfect set of top (20 point) results. Oliver O’Brien representing SLOW was presented with the prestigious London Bus trophy. Any scoring queries should be directed to Paul Todd via fixtures@londonorienteering.co.uk. The final series scoring is below

Another fine summer’s day orienteering (21C) was to be enjoyed at the penultimate GLOSS event in the 2016 series, this time at Barnes Common, just south of the river Thames . Hosts SLOW adopted elements of its evening London Park Race series format, not least by using The Spencer pub on Lower Richmond Road for its ‘event centre’. Terrain was a patchwork of heath- and woodland (mainly dark green) commons with occasional contour detail. Navigational interest was also provided by intersection of railway line at Barnes station and Rocks Lane (A306) where arches and over bridges allowed competitors to progress from one section of the map to the next without the use of compulsory timed out crossing points. The latter were subsequently necessary to traverse the north eastern section of the map.

As with the previous week at Lloyd Park the map scale was 1:5,000m but the density of the controls (18 in 4.0km of which 4 controls supported 2 compulsory crossing points) meant that the orienteering was more sprint style. This was even more the case with the extension course fitting in a further 12 controls in 2.2km predominately on Putney Lower Common.

Michael Crone (SLOW) and Dorte Torpe Hansen (SLOW) were quickest round the GLOSS course in 21:04 and 32:48 minutes respectively. However after handicapping Tess Sullivan (MV), a W21, had the fastest time in 24:05 after a deduction of 12 minutes.

Full (unhandicapped) results are on SLOW’s website. See where you lost time on against the winner on Splitsbrowser. The post handicapping results are available here.

SLOW retain their lead in the GLOSS series going into the penultimate round, with LOK just 4 points behind. Any scoring queries should be directed to Paul Todd via fixtures@londonorienteering.co.uk.

GLOSS course numbers at 71 were 3 up on the previous event at Lloyd Park. This was a good turnout in view of the clash with the opening event of the Creoso orienteering week. The intricate sand dunes around Porthcawl proved to be a rival attraction for many GLOSS regulars. The finale to the series will be next Sunday at Alexandra Palace when the festivities in South Wales will all be over. LOK will be presenting the prestigious London Bus Trophy to the overall series winner. All are welcome to North London!

A hot (22C) and humid day with bursts of sunshine greeted competitors at the third event in the 2016 GLOSS series at Lloyd Park in South East Croydon. Many competitors arrived by tram, and those that didn’t had to look both ways across its tracks to negotiate safely into the car park. There was more than an international flavour to the event with competitors from Denmark, Latvia and Bulgaria.

Competitors were, as in the previous rounds, treated to a professionally printed map, this time at 1:5,000. In contrast to the sprint-type orienteering to be had at Haberdashers’ schools, the extensive grasslands, strips & small clumps of woodland and odd hill gave the area a classic orienteering feel. As at Nonsuch Park two Sundays ago, there was always the option to strike out direct through the long grass rather than to stick to the paths.

Navigation at times was a little tricky on account of the vigorous vegetation growth due to the exceptionally wet spring and summer. This led to the vegetation at some controls being somewhat different to that on the map. For example, control 9, an earth bank in pale orange right next to the fence bordering Shirley golf course, was to be found in a strip of woodland.

GLOSS course numbers at 68 were 3 down on the previous event at Haberdashers’ but up 7 on the previous time a GLOSS event was held here at the end of July 2014. A record 11 clubs for 2016 GLOSS scoring purposes were represented. Full (unhandicapped) results are on DFOK’s website. See where you lost time on against the winner on Splitsbrowser. Show the planner where you went and review others’ routes on Routegadget.

SLOW were top scorers fielding 10 finishers, followed by hosts DFOK with LOK in third with 8 and 7 scorers apiece. SO were fourth with 5 scorers, the club’s strongest GLOSS showing in many a year. The full handicap scoring is available here. SLOW retain their lead in the GLOSS series going into the penultimate round, with LOK just 3 points behind. Any scoring queries should be directed to Paul Todd via fixtures@londonorienteering.co.uk.

Next up is Barnes Common this coming Sunday, 24 July, which SLOW is hosting. See you there!

Last time we were at Haberdashers was at the end of June 2013. That event was the inaugural GLOSS event following the rebranding of the FROLICS series on its 25 birthday. This time it was an overcast and humid (23C) but breezy day. Low flying aircraft from the adjacent Elstree aerodrome buzzed in the air.

Competitors were treated to a professionally printed 1:4,000 sprint standard map. Untaped out-of-bound areas and the start of refurbishment work on the Astroturf pitches after the maps had been printed meant competitors had to read the map carefully. The low ornate not-to-be-crossed wall separating the girls’ from the boys’ school on the way from 1 to 2 and 8 to 9 proved to be a particular temptation. For this reason we have decided to apply a fixed time penalty of 60 and 120 seconds respectively for these obvious ‘transgressions’ in calculating the GLOSS results.

Most unusual control site on the GLOSS course was #5 hidden behind a number 107 London bus now used as a library for the infant girls’ school. The trickiest control, however, was #13 beside an assault course installation in a small block of woods. Competitors faced the risk of running into uncrossable water feature channels (moats) if they undershot, or ending up beyond a small lake if they overshot. Luckily once one had found the control, handily placed stepping stones across the far side channel afforded a dry exit onto a grassed sports pitch.

GLOSS course numbers at 71 were up 7 on the previous Sunday’s event at Nonsuch Park. 40 GLOSS competitors also opted to do extension course which comprised a further lap round the boys’ school. The planned 1.6m extension course had to be shortened somewhat as #25 now laid in an OOB area. Full (unhandicapped) results are now on HH’s website. Show the planner where you went and review others’ routes on Routegadget. (There might be a slight delay before this link becomes operational as control #25 will need to be removed.)

Samuel Fielding (HH) and Sian Mitchell (HH) were quickest round the 4.3 km 19 controls GLOSS course in 20:34 and 26:40 minutes respectively. After handicapping HH’s Rob Oldfield (M50) had the fastest time in 13:58 minutes followed by club mate Matthew Harden (M16) in 14:30, both with time deductions of just over 15 minutes.

Hosts HH were the clear winners of the second round fielding 30 competitors. HAVOC’s team of 8 put in a strong showing, clearly beating neighbouring club LOK on handicap. Competitors from the other 5 GLOSS clubs represented were thinner on the ground. SLOW retain its lead in the series by coming fourth with just three competitors. See here for handicapped results and team scoring. 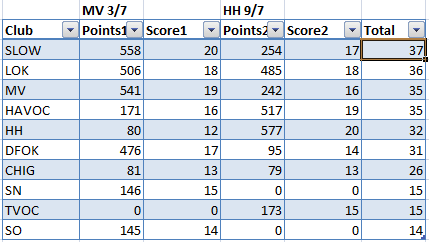 There is now a slight pause until the next GLOSS on Sunday, 17 July which DFOK is hosting at Lloyd Park in the south eastern outskirts of Croydon. I hope you can make it too!
Catherine Galvin
2016 GLOSS series coordinator (LOK)

The rain held off at Nonsuch Park, the venue for the opening event of the 2016 GLOSS series. 75 competitors ventured to Cheam in South London to orienteer around a hunting ground of Henry VIII. 17c and sunny intervals meant that the racing conditions were excellent and, despite recent rains, the going underfoot was good.

Excellent course planning by Sarah Scarborough took competitors through the parkland and woods of Nonsuch Park and adjacent Warren Farm with plenty of route choice including direct through wild grassland. Highlight of the GLOSS course was control 5 on the outside wall of the former banqueting hall. The 23 competitors who completed the 7.6 km GLOSS plus extension course also visited Cheam Park. Full (unhandicapped) results are available on the MV Results page. Show the planner where you went and review others’ routes on Routegadget.

GLOSS course competitor numbers at 64 were just three down on the previous GLOSS event held in Nonsuch Park in mid July 2014. This is a promising start to the 2016 series, not least because Happy Herts were busy hosting the final of the Yvette Baker Trophy.

Sunday was also the debut for the revised GLOSS handicapping system, which has been refined and simplified from that used in 2015. Competitors’ average British Orienteering ranking points as at 16 June 2016 are used to provide a handicap. Each point more than 1,000 earns a 4 seconds handicap. Each point less than 1,000 earns a 4 seconds reduction to actual race time. For more information on the handicapping see the GLOSS guidelines.

Ed Catmur (SLOW) and Carys Morgan (SLOW) were quickest round the 4½ km GLOSS course in 25:00 and 33:41 minutes respectively. However after handicapping Catherine Galvin (LOK) had the fastest time in 34:42 (after deduction of 4:01 minutes) just below the target time of 35 minutes for a competitor with 1,000 ranking points. She was followed by newcomer Francis Carr on 35:13 (no adjustment as his notional ranking points were exactly 1,000).

With the top six on handicap to score, SLOW were the clear winners of the first round fielding 19 competitors. Host club MV was second with LOK close behind. DFOK also fielded a full team of six. 5 other clubs were represented, HAVOC, SN, SO, CHIG and HH. See here for handicapped results and team scoring.

Next up in the 2016 GLOSS series is Happy Herts event in the grounds of Haberdashers’ Aske’s Boys’ School this coming Saturday, 9 July. See you there!