The scoring for Hornchurch is now available here. A narrow win for HH with LOK, HAVOC and DFOK only a few points behind.

There was a solid turnout at the inaugural event of the 2018 GLOSS series at Hornchurch Country Park. Most competitors opted for the 3.7km, 12 control GLOSS course in the 26c heat, even if they had previously declared other intentions. James Errington (M21), fresh from anchoring the final leg of Happy Herts’ Harvester relays ‘A’ team at Tilgate was quickest in 24:22 minutes. James was one of the six competitors at the Harvester who made it to the event.

The London Orienteering Klubb (LOK)’s success in winning the Combined Harvester trophy in 1986 was in fact the inspiration for the commissioning of the London Bus Trophy, awarded each year to the winner of the GLOSS series since 1988.
Quickest female was Sue Carter (SLOW) in 32:47 and juniors Matthew Dixon (M16) of HH in 34:21 and Camille Roux (W18) of SLOW in 43:25.

Thanks to Janet Biggs (HAVOC) for planning the progressively more testing GLOSS course across a mix of wood and open areas, the latter characterised by the recently mown springy long grass.

Thanks also to also to Colin Jackson for organising. Full (unhandicapped) results are available on HAVOC’s website. Show the planner where you went and review others’ routes on Routegadget.

This was the debut of a revised approach to handicapping now fully based on British Orienteering’s ranking scheme. Competitors are now awarded points based on how well on the day they outdo their ranking. Any scoring queries to Paul Todd.

Next up is Addington Hills on Sunday, 1 July, the jewel in the crown of GLOSS 2018 series venues, newly remapped using LIDAR data and unused since 2010. See you there.
More details about the series are on the GLOSS page.
Catherine Galvin

Another scorcher! Even the dainty netbook acting as our results ‘master’ wilted in the heat – its fan simply couldn’t cope.

Addington Hills poses a proper orienteering challenge with a succession of spurs and gullies to catch the unwary out, even in more clement weather. That however was precisely the attraction for the 97 competitors, many of whom came on the tram.

Thanks to the planning team of Dmitry Ushakov and Paul Todd. Paul was also our organiser and mapper.  We had a brand new LIDAR map – with some of the previous contours, based on OS data, significantly shifting as a result. (We hope to use the area next for the SE Relays in 2019.)

To round the day off some of the organising team headed for the Chinese restaurant conveniently located not far from the Finish. It was reported to be nice and cool inside, including by John Pratt, who is the only person who has been a LOK  member continuously since from when it was founded in 1971.

Club scoring under the revamped handicapping system was not as close at the top as last week – less critical to the overall scoring this week was where the contingent of unranked competitors, each earning a ratio of actual points to expected points of exactly 1.0, fell. Only 6 competitors fell into this category, only 2 of whom counted to club scoring  — last week 14 and 6 respectively.

With 20 competitors successfully completing the GLOSS course, SLOW was the easy winner with the top 3 finishing places on handicap — Nicolas Roux (M40), Jemima Hayward-bhikha and Barbara Griessner (W45). HAVOC were 44 points behind with 14 finishers,  closely followed by DFOK, MV and then last week’s winner, HH, in 5th place. Therefore all to play for in events 3, 4 and 5 in the series.  Any scoring queries to Paul Todd.

The weather forecast for next Saturday’s event at Ellenbrook Fields is also predicted to be a scorching 29c. See you there! 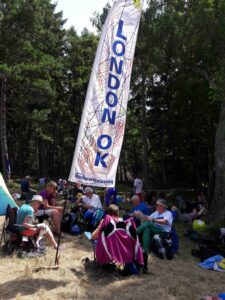 LOK at the World Masters Orienteering Championships in Denmark

Sunglasses and a sunhat were recommended attire at today’s GLOSS in the sweltering heat of Ellenbrook Fields,  an area of scrubland that was once the aerodrome at Hatfield. Long sleeves would also have been handy to protect against the rampant vegetation. This is the first time, and likely the the last time, that HH will use this venue for GLOSS as permission has been granted for gravel extraction from this site.

GLOSSites were treated to sprint style planning by David Frampton with two butterfly loops to split up competitors but on an area rather un-sprint like in its unevenness underfoot . Only for two controls did we venture into more easygoing woodland. Balance as well orienteering skills were definitely required on the 3.6km, 20m climb, 20 control course. As well as scampering skills to clear the locked gate — thanks to grazing cattle — ahead of the last two controls into the Finish.

Thanks also to Helen Errington for organising the event and tweaking the usual arrangements for a HH Saturday Series event to the needs of GLOSS . Assembly was located close to the Start and Finish,  somewhat of a hike from the car parking. A parasol afforded some protection to the registration team from the baking sun.

The GLOSS course itself proved sufficient for most in the 30c+ heat with Alex Lines an easy winner over 6.0km in 41:27.

Then it was home to the other big event of the day. Sweden is the undisputed home of orienteering but would England prevail in the sport it invented?

With 29 competitors successfully getting round the GLOSS course HH were clear winners on handicap. In second place were HAVOC, 25 points behind with just 12 competitors. Only 2 other clubs fielded a full team of six scoring competitors, namely SLOW and DFOK. Quickest on handicap was James Blake (M40) of HH followed by Tony Biggs (M65) of HAVOC, Karl Jones (M45) of HH and Jennifer Taylor (W70) of CHIG. Tony and Jennifer’s handicaps were hard earned based as they were on their best six runs at ranking events in the past year, whereas James and Karl’s  handicaps had been earned at a single event, both at HH’s Egypt Woods & Burnham Beeches ‘badge’ event back in icy cold February.

There is now a short interlude before GLOSS resumes next Sunday, 15 July. No let up in the heat is yet predicted. Be there to find out if hosts SLOW will be as imaginative as today’s planner with Wimbledon Common!

Another scorchingly hot day for event 4 in the GLOSS series on the same day as the men’s singles final just a kilometre or so away on Centre Court. At least GLOSSites were able to shelter under the veranda of the Telegraph pub whilst they patiently waited to be registered while SLOW sought to make their all electronic set up run smoothly – thanks to Phil Craven (DFOK) and Mike Elliot (MV) who helped sort out problems before Gordon Parker (SLOW) was able to take over.

But the wait was well worth it – Wimbledon Common’s woods afforded protection from the blazing heat as well as navigational challenge to those who didn’t want to take the long way round on the paths. Thanks to Duncan Grassie (SLOW) for both planning and organising. Highlights were first contactlessly punching the hill summit (#7) at Jerry’s Hill and then sight of the impressive Wimbledon Windmill between #8 and #9.

Quickest today was Ed Catmur (M35) in just 22:26 and Heather Findley in 33:36, both from host club SLOW. Impressive among the juniors was Frank Townley (M16) of SN in 32:50. It was also good to see a sprinkling of international visitors from Italy, Germany and Russia enjoying their orienteering

Competition on handicap was intense with 81 competitors successfully negotiating their way round.  Provisional results on handicap are here. HAVOC were clear winners with the new handicap system with 5 scorers in the top 20 results.  The other clubs were some distance away with LOK just ahead of MV, SLOW, DFOK and HH.

Series points going into the final round are as per the table below.   HAVOC have taken a clear lead – but with one event score to be dropped, can other clubs catch up? 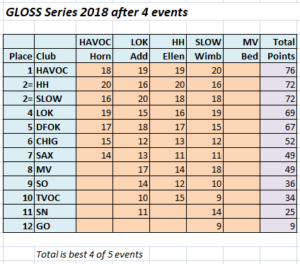 The heat is predicted to continue to the final event hosted by MV at Beddington Park, an area unused since 2009. Will the temperature reach 26C or more again? Be there to find out!

Yet one more very hot day (26c), humid rather than blazingly sunny, to round off the 2018 series.  MV, the organising club, were rewarded with the highest turnout on the GLOSS course of 96 at Beddington Park. The area had been remapped to the latest sprint orienteering specification standards for the event — the area was last used for GLOSS in July 2013 on an equally hot day but on a 1:7,500 map ‘forest’ map.

Thanks to husband and wife team of Daniel and Lisa Sullivan both organising and planning the event, ably supported by Deborah Sullivan and Mike Elliot. Event centre was room behind the Pavillion Café at the north east of the area. The consensus view was that the 3.7k, 20 control GLOSS course  benefitted significantly from the new sprint style map offering much more of an stimulating challenge than before. Competitors on the extension course were treated to an excursion around the cricket pitches and nets before venturing into a newly mapped suburban area of Beddington through which the River Wandle also runs. Highlight was control #28 across from the 14th century flint church, an inner corner of a linear thicket within a stone wall complex

Results (version 1.2) with handicap are here with MV winning the final round by 5 points.   Competition was keen with six clubs (SLOW, HAVOC, LOK, DFOK, HH as well as hosts MV) able to field full teams of six competitors or more.

Going into the final round HAVOC could 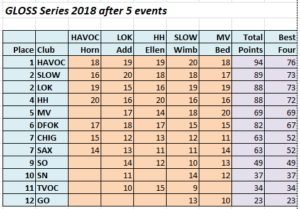 only be equalled on series points rather than beaten outright. Fourth place today turned out to be enough for HAVOC to comfortably retain the London Bus Trophy, which they won for the first time in the series’ 30 year history last year.  The new handicapping system seems to have ensured closer competition over the whole series!

Congratulations to that select band of competitors who made it to all five events:

Preeminent among these were Shane Muggeridge and Tatiana Virissimo de Andrade, the latter enjoying her first GLOSS series having recently arrived from Brazil. Shane (M20) and Tatiana (W35) were the only competitors who counted for their clubs (HAVOC & DFOK respectively) at each and every event, scoring highly on each occasion.

That’s it for this year with a total of 398 GLOSS course finishers, down on the 483 recorded for 2017 when the World Masters were held at Easter, but up on the 348 recorded for 2016 when such  temptation was also on offer.

Four dates are already in the diary for next year 2019, with SLOW due to kick of the proceedings on Sunday, 30 June most likely somewhere in South West London.

Between now and then LOK will be conducting a review of the latest revision to the handicapping system. By assigning all unranked competitors a ‘met expectations’ ratio of 1.0, we have been able to do away with the need to establish competency ratings. What appears now to be critical is the extent to which a club’s ranked runners after handicapping all ‘exceed expectations’. Results at an individual level appear to have become much less predictable with practically everyone seemingly having the possibility of coming near the top on a good day. If you have your own thoughts, please catch me at an event or email me at equipment@londonorienteering.co.uk .