Cedric worked in London for the BBC as did his wife Irene. They and their young family joined LOK in 1972. They became keen members and Cedric enjoyed the sport without being ultra competitive. He organised the first ever night-event to be held during the day – in Chislehurst Caves. His ‘planners comments’ to competitors noted that he hoped the course ‘avoided the worst of the bracken’.
Daughter Helena is still a keen orienteer. 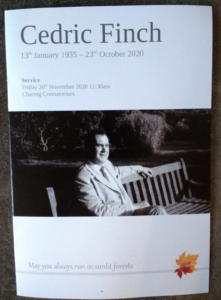 Cedric was not a fan of Relays. Here is his (tongue in cheek) article in Lokation 4 in August 1978. Note the acronym for the new game.
ADDINGTON REALLY
This is not a review of the event on 18th June, but an argument for some improvements to relays. The only advantage of a relay is that it provides a ‘first past the post’ winner and therefore the handover/finish becomes a scene of audience participation and jollity.
The disadvantages are greater:
1. As a Club event it is elitist. It is easy to raise a team of M21s, but not so easy for the very young and very old. (For the very bad, like myself, its a non-event). And a team of mixed age groups defeats the ‘first.past the post’ principle.

2. The preparation is enormous and costly. For Addington 240 maps were drawn on, checked, poly-bagged, paper-bagged and marked. Fortunately we overestimated (slightly) the number required so no-one was turned away, but that achievement wasted time and energy.

3. (My main argument). The courses are less than satisfactory. Each leg has to be approximately the same in length, direction, complexity and choice of route for each of the three runners. This results in one leg being good (i.e. the one you would have planned for a normal event) and the other two being not so good.

I would like to suggest two improvements.
1. The Team Score Event
(I’m told this has happened as a Hangover Handicap, but I didn’t see it). Briefly, the 3 runners in a team have to visit the controls between them i.e. each control should be visited by one member of the team only. This would require much thought by the team when the whistle blows to ‘plan’ 3 suitable courses. If a team visits every control within the time limit a second (different) map would be issued to them.
2. A New Game Called Losing Oneself Kwickly (a test of accuracy)
A normal relay event but the object is for the planner to mislead runners into punching the wrong control. The controls would not have identification codes on them and could be sited on similar features within 50 metres of each other. Points would be awarded according to the composition of the team and the time taken and points would be deducted for punching the wrong control.
Any Questions?