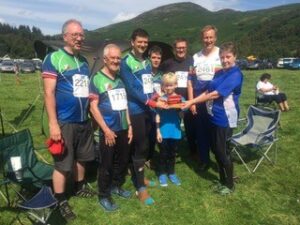 The trophy was presented to HAVOC by Julie Cleary at the Scottish 6-Days.

It was fine orienteering weather for the final event in the 2019 GLOSS series hosted by Mole Valley. 89 GLOSS competitors plus a further 16 on Yellow ventured to Cheam in South London to orienteer around a hunting ground of Henry VIII. 19c and sunny intervals meant that the racing conditions were excellent. Thanks to recent rain the ground underfoot was not too hard albeit not springy. For the second time in the 2019 series we were treated to contactless punching (SIAC) and the 1:10 000 map was vibrant and sharp.

Thoughtful planning by George Engelhardt took competitors initially through Cheam Park and Cheam Recreation Ground before a tour of Nonsuch Park itself, avoiding the badly overgrown section Warren Farm to the south. It was easy to run off in the wrong direction! The 32 competitors who went on tackle the 7.0 km GLOSS plus extension course also had a tour of the foundations of the old Palace (#17) as well as the outside wall of the former banqueting hall (#20). Show the planner where you went and review others’ routes on Routegadget. Thanks also to Deborah Sullivan for ably organising the event.

Quickest today on the 4.0km 30m and 13-control GLOSS course was son Daniel Sullivan (M21) of MV in just 20:45 and Carys Morgan (W40) of SLOW in 29:59. See here for unhandicapped results. Results on handicap are here with HAVOC winning the final round by just 4 points ahead of SLOW, with 12 finishers to SLOW’s 19. Six clubs fielded full teams. Francis Ronnan-Bradbeer (M60) of DFOK repeated his win on handicap from the first event in the series at Gunpowder Park thanks to outperforming against expectations by over 100%.

Going into the final round HAVOC, LOK or HH could have won the coveted London Bus Trophy. SLOW’s second place however dashed both LOK and HH’s hopes. HH put in a fine team performance with just 7 runners to just pip LOK by 3 points. The net result is that HAVOC retained the Trophy by 3 series points ahead of HH, who were able to drop its poor showing at Barnes Common where it fielded 5 rather than 6 competitors needed to count fully. LOK and SLOW were third and fourth – one series point behind HH and LOK respectively. Competition for the London Bus Trophy hasn’t been this close at the top for quite a while. The handicapping system refreshed this year to base expectations on average ranking points in the past year seems to have help ensure ever closer competition over the whole series! 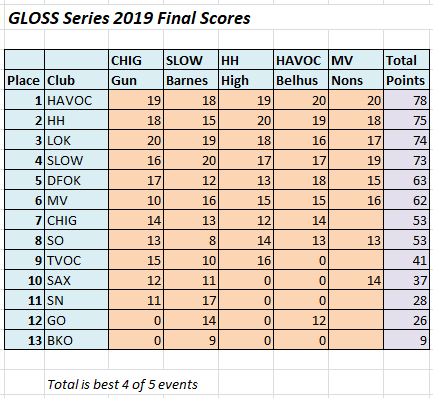 Congratulations to that select band of competitors who made it to all five events: David LeFevre (DFOK), Colin Jackson (HAVOC), David Float (HAVOC), Graham Batty (HAVOC), Guy Lidbury (HAVOC), Anthony Flick (LOK), Catherine Galvin (LOK), Sue Carter (SLOW). And also to those who either competed or planned / (helped) organised in all five including: Tony Biggs (HAVOC) and Mike Elliot (MV)

Congratulations to HAVOC for retaining the Trophy for the second year in a row. LOK will be presenting the London Bus to HAVOC at the Scottish Six Days. Photo to follow.

That’s it for this year – the 2019 series has been very successful with GLOSS course finisher numbers up 25 (425 versus 400). First event in the 2020 series will be hosted by SLOW on Sunday, 30 June most likely somewhere in South West London. In the meantime if you have any comments on the GLOSS series guidelines – which covers all aspects of the series including handicapping please catch me at an event of email me.

For the penultimate event in the 2019 series GLOSS returned to Belhus Woods, near Upminster. HAVOC were hosts, with Colin Jackson ably organising and LOK helping out by manning the Start. Thankfully, the unexpected rain earlier on in the morning had cleared up to leave a pleasant if humid orienteering conditions (17c).

Belhus Woods comprises ancient woodland, parkland and gravel workings turned lakes-and-isthmuses from the former Belhus estate. Planner Gillian Edgar tested competitors by posing route choices: direct across sometimes very overgrown terrain with deep ditches or a long way round on paths. As in 2017 competitors on the extension were treated that rare control feature, a pipeline (#18), as well as ditch right next to a chimney for making the bricks for the original estate mansion (#19). Janet Biggs, planner at the previous 2017 GLOSS event at Belhus Woods acted as controller.

67 out of 69 competitors successfully navigated their way round the 3.3km 15 metres 13-control GLOSS course. David Dixon (M45) of HH was the quickest of the men in 21:02 this week and Georgia Jones (W21) of OROX (Australia) was again quickest of the ladies in 25:34. However Catherine Galvin (LOK), who took 34:03, outperformed expectations by nearly 20% to be quickest after handicapping. See here for unhandicapped results.

With the top six on handicap to score, 5 clubs (HH, DFOK, SLOW, LOK as well as hosts HAVOC) were able to field full teams. Current holders of the London Bus Trophy HAVOC narrowly won team competition for the first time this series, 7 points ahead of last week’s winner, HH, who fielded a strong team of 11. However, LOK, leaders in the series scoring going into day’s event were only able to place 5th.

Team leader board to follow shortly. Provisional results on handicap are here. Series points going into the final round are below. It looks to be a three horse race between the top three – noting each can drop their lowest scre. Any scoring queries to Paul Todd.

Don’t forget to mark up your route on Routegadget and see where you lost time against the winner on Splitsbrowser within Routegadget.

Final event in the series will be hosted by MV at Nonsuch Park , last used for the inaugural GLOSS event in 2016. It is sure to be an exciting finale to the series!

The third event in the GLOSS series, and the final event in host club’s, Happy Herts, 11-month long 2018/2019 Saturday Series, was held at Highfield Park, an area new to GLOSS. We were again treated to a 1:5,000 sprint style map but with an unconventional twist to add to the mental challenge – the grid lines were orientated north east to fit the area neatly onto an A4 map.

Thanks also to the efficient organising team at HH led by Penny Parkes where everything was provided for – including that rare treat nowadays – squash at download. Mike Bennett (HH) acted as controller.

With 35 competitors successfully getting round the GLOSS course HH were clear winners on handicap. In second place were HAVOC, 60 points behind with 13 competitors. Only 2 other clubs fielded a full team of at least six scoring competitors, namely LOK and SLOW with 7 apiece – the ongoing Orienteering World Masters competition in Latvia attracting a number of otherwise keen GLOSSites. Quickest on handicap was Jennie Soulsby (W40) followed by Gergely Farago (M45), both of HH.

There is now a short interlude before GLOSS resumes next Sunday, 14 July. HAVOC are hosts at Belhus Woods, near Upminster, for a 1: 10,000 forest style map for the first time in this series. Be there to experience the challenge!

98 of 100 competitors successfully completed the GLOSS / GLOSS plus extension course on Barnes Common today in hot and humid conditions (20c+). Another 23 competitors on the Yellow made for a bumper turnout. Unhandicapped results plus photo of the Start are on the host club, SLOW, website. Thanks to Nikolay Kolev and Vesela Chokoeva for planning and organizing the second in 2019 GLOSS series today. Nikolay’s GLOSS course gave plenty of route choice right from the start with the complexity of options for getting over, under and around Barnes station utilised to maximum effect. Please mark up what you actually did on Routegadget.

The handicap scoring results are here. With 25 competitors from the club successfully completing the GLOSS course, SLOW was the easy winner of the team competition. Jemima Hayward-Bhikha (W18) finished top on handicap, outperforming against expectation by over 50%. LOK with 12 competitors were second comfortably ahead of current holders of the London Bus Trophy, HAVOC with 8. SN and MV in fourth and fifth places were the only other clubs fielding a full team of six. But what was missing in depth in terms of individual club member turnout beyond those five teams was made up by breadth – all thirteen eligible South East and South Central clubs fielded at least one competitor for the first time in living memory.

Next up in the series this coming Saturday is Happy Herts event at Highfield Park in St Albans. Do make it if you can.

Gunpowder Park as an orienteering area has significantly benefitted from park landscaping work since it was last used for GLOSS (then Frolics) back on a boiling hot day in July 2010. Planner Harold Wyber (CHIG) was therefore able to plan a gradually more challenging course utilising previously unused features on the best part of the area, now mapped at 1:5,000 to the sprint standard. The 2.5km 15m 11 control extension also ventured north over the Black Ditch to a newly mapped strip of housing estate.

Thanks also to Ray Curtis of hosts CHIG for organising. Unhandicapped course results are already available on CHIG’s website. Show the planner where you went and review others’ routes on Routegadget. (There may be a short delay before the courses are shown.)

Today was also the debut of further refinements to handicapping – competitors are now awarded points based on how well on the day they outdo their average ranking scores across all British Orienteering (BO) ranking events over the past year instead of their best six. Full details of the revised handicapping approach here and list of average scores for all BO members here.

Five teams fielded a full team of at least six successful competitors for the handicap competition. Quickest on handicap ie the individual whose ratio of actual event points to expected points based on their current ranking was Francis Ronnau-bradbeer of DFOK. As a team LOK prevailed over current holders of the London Bus GLOSS trophy, HAVOC, and HH – all of whose six counting competitors scored ahead of the swathe of the sixteen unranked competitors who each were assumed to perform at 0.95 against expectations. Full handicapped results here. Any scoring queries to Paul Todd at fixtures@londonorienteering.co.uk.