I think you’ll agree that today’s 1st London Ultra Sprint was a cracker …. and for those who also attended the 4th City of London Race the previous day, I hope you’ve had a weekend to remember! 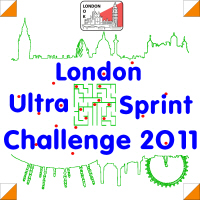 Results for the four races are now available:

Links to the maps: Course A, Course B, Course C, Final, All Controls

Splitsbrowser for the four Mass Finals – not divided by Classes …. make what you want of these as some runners will have time penalties.

Short video of some of the action around the maze.

If you’ve enjoyed (or otherwise) today’s event, feel free to share your thoughts on the Nopesport forum, or email chairman@londonorienteering.co.uk

When the idea was floated of doing an Ultrasprint event to complement the 2011 City race I jumped at doing it.   It is a interesting format although one with no standard structure.   Early on I decided to have a format where we had 3 heats followed by finals.  Having a mass start final for the top four was done for spectator appeal – which I thought worked well.  Head to head racing like this isn’t something that you get to do often.   Having a start interval of either 20 or 30 seconds meant that we got everyone thought their courses quickly but hopefully didn’t impact on your run.

The courses were planned to try to get variation – although you were seeing the same area, you were seeing it from different angles.   It was spectacular to see everyone criss-crossing around the area.  The aim of the mazes was to add variety, and from some of the confused looks from some people it looked to be easy to lose contact with where you were.

We picked this bit of Regents Park for the event as it had a variety of terrain.  Regents Park has not been used for orienteering much as it is so open but this part of the park worked for an Ultrasprint.   Hopefully you adapted quickly to the map at 1:1250.  You hit things very quickly and it made parallel errors easy.

One of the biggest challenges was making the event work computer system wise.  We used AutoDownload, and things were setup with the prologue courses being a 3 day multiday event with a single course per event, with a separate event for the class finals and a separate event for the mass finals.  All courses were setup as ‘linear with penalties’ courses.  This is incompatible with the automatic butterfly support which is why we had to have 4 separate final courses from a systems perspective. This complexity was why we couldn’t offer entry on the day as we had to enter people’s details in 3 different places.   Coping with SI card number changes was enough work!

The choice of 30 second penalties for missed controls appeared to be effective.   It meant everyone stayed in the competition but were penalised for simple mistakes.  Some of you spotted that if you weren’t sure which of a pair of controls were right then you could just punch both – which was fine – but it will probably still have been slower than being accurate in the first place.   Having a separate penalty for punching a wrong additional control could stop this, but wasn’t possible systems-wise.

One last minute decision we made was to have multiple boxes at the two controls at the centre of the butterfly loops.  These had two stakes and boxes but only one flag – and the stakes had the same number.    In hindsight we should have made it clear in the final details that this was different from other places where we had two separately numbered controls, two stakes and two flags on different sides of the same feature.  Sorry if you got confused by this.

There aren’t many events where you can run 100 controls in a day in such a short and intense period.  I hope everyone enjoyed it.

Thanks to Neil for his usual expert organisation and LOK members for their help on the day, especially those who didn’t get to run themselves.  Thanks also to Mike for his support as controller.