The results are in for the fifth GLOSS 2014 race in Lloyd Park!

See the full results of the DFOK Lloyd Park event here…. and here’s how it affects the overall leaderboard:

SLOW take another great win with 578 points, again the highest of the series so far. It wasn’t enough though, as in fact HH had it wrapped up a week ago!

Congratulation Happy Herts, the formidable triple wins at the start of the series sent tremors around the Orienteering world that no club could counter. A 4.5 point margin is massive in GLOSS scoring, so you deserve the fantastic prize of a small red tonka bus, well done!!

SLOW’s good Lloyd Park performance didn’t quite allow them to jump above HAVOC into second place, both clubs providing more than enough runners to score good points, but HAVOC taking the runners up glory.

A special mention to Anthony and Janet Biggs HAVOC, David Float HAVOC and Nikolay Kolev TVOC for being ever presents at all 5 events, great work guys!

The results are in for the fourth GLOSS 2014 race in Ham Lands!

See the full results of the Ham Bad Lands event here…. and here’s how it affects the overall leaderboard: 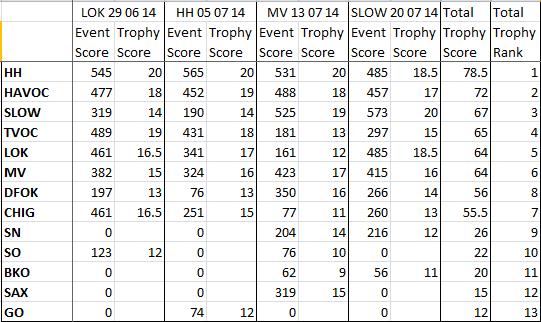 SLOW take a great home win with 573 points the highest of the series so far, quality and strength in depth in evidence, for sure…

LOK planned well with their 6 attendees scoring well to take =2nd on the day with HAVOC. Remember only the top 6 from each club contribute to the result.

The results are in for the third GLOSS 2014 race in Nonsuch Park!

See the full results of the Nonsuch Park Woods event here…. and here’s how it affects the overall leaderboard: 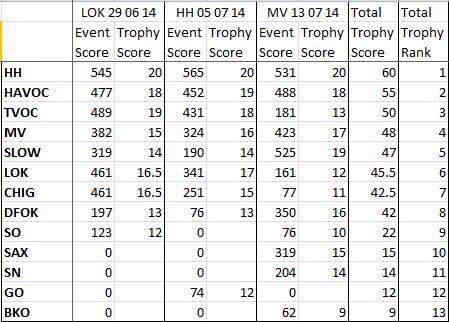 Those Happy Herts are odds on for a trophy win after another great team effort, their top six runners all scoring in the top 25.

HAVOC’s strong turnout allowed them to consolidate their second place in the chase for the golden Jules Rimet (small red  bus) trophy. Likewise for MV and SLOW as they rose above LOK and CHIG into fourth and fifth respectively. The predicted re-emergence of more southern clubs has come about, if only I had been to Billie Hills….

The results are in for the second GLOSS 2014 race up in Whippendell Woods!

See the full results of the Whippendell Woods event here. … and here’s how it affects the overall leaderboard: 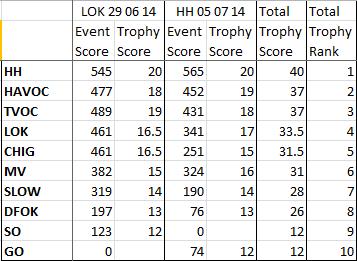 Happy Herts take victory again, with HAVOC moving above TVOC into second place being the only top 8 club movement.

Will the newly upgraded Thameslink tempt the HH legions South to Nonsuch Park to consolidate their stranglehold on the coveted trophy? Or will they copy the black cabbies and refuse to cross over into the southern badlands, leaving room for the other clubs to close the gap?

This is the overall leaderboard after 1 race: 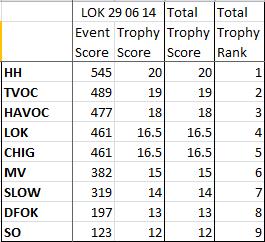