Last week we were treated to jazz and tea dancing at the Finish at Beckenham Park Place, this week at the final event in the GLOSS 2021 series at Scratchwood it was pyrotechnic / garage music around control #6 on the GLOSS course. A 21-strong police force marched in formation down past Download into the woods in order to serve a dispersal order on the overnight rave that was still ongoing during the event. 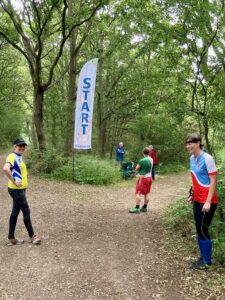 Things were a little cooler and shadier of late (20c) but it was still very humid. The thunder and lightning thankfully held off until all the kit was safely back in the LOK equipment shed.

The course, planned by Neil Brooks (LOK), was technically challenging on this area previously unused for orienteering: its Light Green status maintained by the fact that one was never too far from a path. Unfortunately, Neil was unable to be with us. Like some others across the GLOSS series, he had to self-isolate on his big day. Thanks to controllers Julie and Ronan Cleary (LOK) for covering Neil’s absence by both putting out and checking the controls. Thanks also to David and Miriam Rosen (LOK) for both arranging for Martin Bagness to map the area and organising the event itself. Clive Hillier (LOK) was the event photographer. 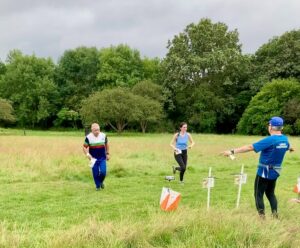 We hope you appreciated being able to see the results on your smartphone. They were being updated every two minutes.

3 clubs were able to field full teams with HAVOC winners on 524 points from 13 runners, just 8 points clear of HH with 20 runners, followed by hosts LOK. SLOW and TVOC followed with 5 runners. This was HAVOC’s third win of the series – following wins at Wanstead Park (event 2) and Beckenham Park Place(event 4). 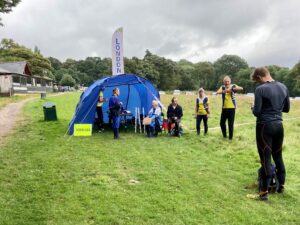 Quickest on handicap ie the individual whose ratio of actual event points to expected points based on their current ranking was Francis Ronnau-Bradbeer (M65) of DFOK with an outperformance ratio of 1.698, just ahead on time, of Anthony Biggs (M70) of DFOK.

Full details of the handicapping approach is here and list of average scores for all BO members as at 20 June 2021, as given in the penultimate column, here.

The penultimate event in the GLOSS series was held at Beckenham Park Place in intense (28c) heat. Thankfully there was plenty of woodland running to largely spare competitors from sunburn.

Planning at Beckenham Place Park, planner Rod Harrington (DFOK) wrote, has become a lot easier since the golf course constraints have been removed. The courses, the planner explained, seemed tricky enough in places to catch several of you out as very careful concentration was needed to navigate the path network in the areas of dense forest. Like last week at Reigate Priory Park the area had been mapped at 1:5,000 sprint style, this time with 2.5m contours. Many thanks to Rod for both organising and planning.

Control 7 went missing early in the event before being reinstated, and so 6-7 and 7-8 has been removed from the results for everyone. In fact control 7 was the trickiest control to find on the whole course, even when it was in its proper place!

Late finishers were treated to an impromptu 2-person jazz concert adjacent to the Finish, complete with an audience of sunbathers amidst the shade of the broadleaf copse, around 100m downhill of the Mansion House. A novel orienteering experience indeed.

89 competitors completed the GLOSS course (3.5km, 16 controls before adjustment) with 39 of these also completing the Extension (5.3km, 125m, 22 controls before adjustment). Quickest was Ed Catmur (M35) of SLOW in 18:45, over 4 minutes quicker than the next competitor, Alex Dutton (M45), also of SLOW. Quickest female was Sue Carter (W50), also of SLOW in 27:09. The assistant organiser, Andrew Evans, DFOK, told me that otherwise the GLOSS course produced an expected winning time just a shade short of 22 minutes, within the recommended winning time of 20-22 minutes.

5 clubs were able to field full teams with HAVOC winners on 544 points from 14 runners, 50 points clear of SLOW with 13 runners, followed by hosts DFOK, only 1 point behind. LOK and MV, both with only 6 runners successfully completing the course, were 4th and 5th respectively. This was HAVOC’s second win of the series – the first was 2 weeks ago at Wanstead Park.

Quickest on handicap ie the individual whose ratio of actual event points to expected points based on their current ranking was (again – see Wanstead Park report) John Rae-Smith (M55) of SLOW with an outperformance ratio of 1.393, just ahead of Gee-Hae Kim (W35) of GO.

The third event in the GLOSS series was held at Reigate Priory Park, an area not used for competitive orienteering in the past 2 decades. Planner Mike Elliot (MV) offered us a real orienteering challenge on the ridge of wood, known as Reigate Park, newly mapped by Philip Gristwood (MV). The spur and valley area, mapped at 1:5,000 sprint style, was reminiscent of both Addington Hills, near Croydon, and The Nower, nearby to the south of Dorking. Trickiest controls were perhaps numbers 12, in the thick of a steep hillside, and 14, the latter demanding athletic prowess to descend into the depression beyond the rootstock. 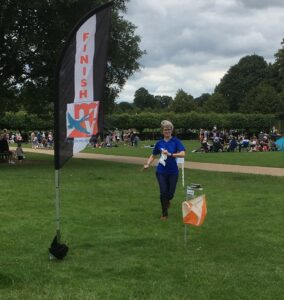 Thanks also to the efficient organising team at MV led by Bill Alexander with Tony Burton in charge on the day. Philip Gristwood also acted as controller.

With the bumper entry 8 clubs fielded full teams with SAX winners on 483 points, 8 points clear of SLOW, followed by hosts MV, 9 points further behind. Previous winners of events in the series HAVOC (last Sunday at Wanstead Park) and LOK (the previous Sunday at Boston Manor Park) were 4th and 5th respectively. Well done to SAX, a club which has not in recent years fielded a full team let alone won an event.

Quickest on handicap ie the individual whose ratio of actual event points to expected points based on their current ranking was Mo Fitzpatrick (W50) of SO with the relatively modest outperformance ratio of 1.152, just ahead of Bob Reed (M70) of MV. Ffion Bricknell (W18) was Saxons’ top scorer in 10th place in 43:34 and the top performing junior.

Sunny intervals yet humid weather (19c) provided ideal running conditions for the second event of the 2021 GLOSS series. Wanstead Park lived up to its billing of an ideal mix of fast runnable areas and tight complex woodland. An attractive setting around several lakes. Ducks and friendly dogs were very much in evidence.
Following heavy rainfall overnight, conditions underfoot were slippery, making the ascent to the summit at #8 somewhat challenging. Many thanks to Harold Wyber who planned, Ray Curtis who organised as well as the rest of the CHIG event team.
The GLOSS course, on one side of the 1:10,000 map, focussed on a chunk of woodland and open land to the east and the Extension course, on the other side, took one along strips of woodland around a line of lakes to the west. Both were well received.

There was a slight issue with the finish arrangements in that GLOSS-only competitors were expected to punch the Shadow Finish (#149) and then the 2-or-so-metres adjacent Finish. The normal arrangement is that competitors punch either the Finish or the Shadow Finish if continuing to do the Extension course. For calculating raw GLOSS times and GLOSS handicapping purposes we have timed everyone to the earlier of either #149 or the Finish.

Four teams fielded a full team of at least six successful competitors for the handicap competition. Quickest on handicap ie the individual whose ratio of actual event points to expected points based on their current ranking was John Rae-Smith (M55) of SLOW with the super-impressive ratio of 1.519. Team-wise, HAVOC, current holders of the London Bus GLOSS trophy, amassed 576 points, 68 points more than LOK in second place. HAVOC secured 6 of the top 10 places on handicap from a team 16 strong. Last week’s winners, SLOW, were third and MV fourth.

Overcast yet humid weather (18c) provided ideal running conditions for the inaugural event of the 2021 GLOSS series. An elevated stretch of the M4 motorway high above Boston Manor Park and a stretch of the Grand Union Canal between Boston Manor Park and Elthorne Park provided route choice on many legs. Many thanks to Duncan Grassie of SLOW who both planned and organised the event, and to Gordon Parker, also of SLOW, who handled entries and SIAC. The GLOSS course, across a two-sided (and off-set) 1:4,000 map, made good use of the woodland and less manicured parts of the area but the 1k stretch between the two parks along the canal favoured runners. The technical difficulty of GLOSS will increase across
the series and competitors will face a challenging Light Green course at the final event in the series, LOK’s event at Scratchwood.

2 seconds have been deducted from GLOSS-course only competitors because the Shadow Finish was placed well short of the main Finish.
Uncorrected this would have given Extension course competitors an unwarranted advantage.

We have retained the refinements to the handicapping we introduced in 2019; competitors are awarded points based on how well on the day they outdo their average ranking scores across all British Orienteering (BO) ranking events over the past year instead of their best six. Following the suspension of orienteering during the Covid-19 pandemic, the period over which British Orienteering ranking points for handicapping purposes has been averaged has, however, been extended to the 27-month period from March 2019. This is in line with how the BO ranking list is currently prepared.

Three teams fielded a full team of at least six successful competitors for the handicap competition. Quickest on handicap ie the individual whose ratio of actual event points to expected points based on their current ranking was Bob Reed (M70) of MV with a ratio of 1.326. Team-wise, LOK amassed 546 points, 40 points more than SLOW, both with teams 15 strong. Current holders of the London Bus GLOSS trophy, HAVOC, were third. Unranked competitors are each assumed to perform at 0.95 against expectations.

Updated GLOSS guidelines. The principal update is that, exceptionally for 2021 on account of the suspension of orienteering during the Covid-19 pandemic, the period over which British Orienteering ranking points for handicapping purposes are averaged will be the 27-month period from March 2019. This is in line with how the BO ranking list is currently prepared.